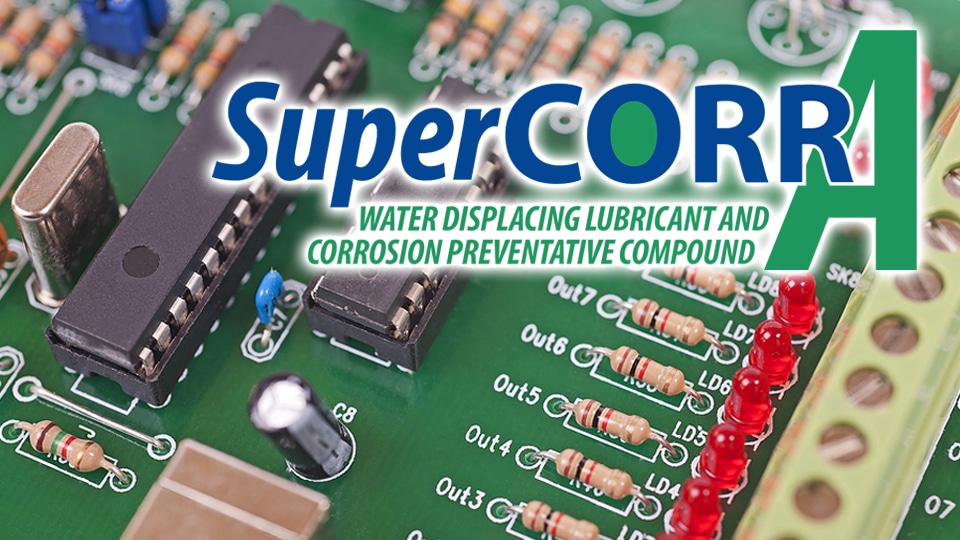 Super CORR A is a proven and cost-effective way to prevent or inhibit corrosion from destroying electronics and electrical components. Adverse work environments where corrosive gases such as hydrogen sulphide are found, can cause severe corrosion and rapid deterioration of electronic components and equipment, including connectors and switches.

Lost productivity and revenue caused by plant and equipment downtime
Corrosion, in its many forms, costs both private and public sectors hundreds of billions of Euros a year to repair or replace electrical, electronics, or avionic components because of failures caused by corrosion. While all metals corrode, due to a number of different factors, there is no simple or single solution to the overall corrosion problem. However there are some very cost effective and proven ways to prevent corrosion and failures caused by corrosion and thereby reducing or eliminating associated costs and increasing safety which should be foremost in the mind set of any preventative maintenance programme manager.

Super CORR Awas specifically designed to lubricate and prevent corrosion in electrical fittings and connectors; electrical and avionic harness assemblies and connectors; electrical and electronic switches; close tolerance and dissimilar metal components; lighting connectors and sockets. A unique non-flammable “self-healing” ultra-thin film lubricant with a proprietary corrosion preventive compound that will not harden or crack, is not a wax or oil-based product and is formulated without sulphates, chlorides or halogens.

Super CORR A inhibits corrosion caused by exposure to both fresh and salt water moisture as well as the corrosive vapours from Sulphur dioxide (SO2), Nitrogen dioxide (NO2), Hydrogen Sulphide (H2S), Ammonia (NH3), and Chlorine (CL12) based gases found in waste water and sewer treatment plants, pulp and paper mills and plants, chemical and petroleum plants, maritime industry, aircraft/airline industry, military equipment including ships, aircraft, and rolling stock, auto industry, farming and agriculture industry, and the list goes on.

Super CORR A extends the working life of electrical components and systems and other critical items by preventing the deterioration and/or failure caused by corrosion and can significantly reduce downtime, operating and maintenance costs as well as enhance safety. An ultra-thin film, water displacing lubricant and corrosion inhibiting compound Super CORR A has undergone extensive testing by Battelle Labs as well as the U.S. Air Force and meets MIL-DTL-87177B (revised MIL-L-87177A) specification. SuperCORR-A is used by NATO (NATO NSN  8030-99-226-6966) to protect avionic, electrical, electronics, electrical switches and connectors and components from corrosion in both the military and civilian aircraft. Savings for the U.S. government alone is estimated to be in excess of $50 million per year.

Super CORR Aprovides a superior lubrication coefficient and protects components against moisture, wear, general and fretting corrosion, surface static electricity, corona, and other electromigration problems. The super thin non-flammable lubricant film is only 7 microns (0.00028 inch) thick and is formulated to meet the RoHS directive. It is unexcelled in preventing deterioration and contamination on all surfaces of electronic equipment.

The question for you is: What is the cost of NOT using Super CORR A in your preventative maintenance programme?