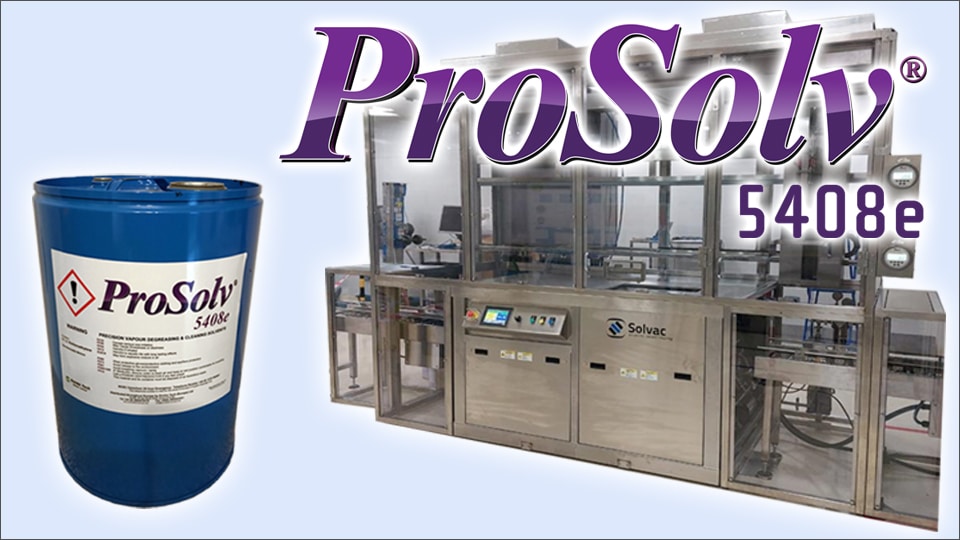 This guide for production engineers explains why vapour degreasing is the most effective and economical process for cleaning of manufactured components.  The start of a new year is always a good time to review your existing cleaning process and ask yourself  ‘am I using a safe modern solvent for vapour degreasing?’. 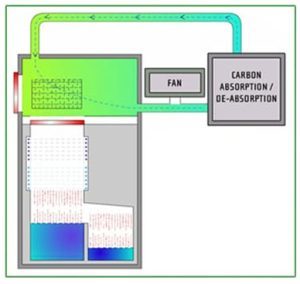 Vapour degreasing is the simplest but most effective degreasing and cleaning process which, until recently, has been subject to little change since it was first invented in the early part of the last century. This is a very mature chemical technology which legislation is now effecting changes so fundamental that the more accurate name for the process “Condensation Cleaning” should be used to reflect the improvements in equipment design, chemistry, reduced emissions, economies in usage of solvents and the subsequent environmental acceptability compared to the open topped tanks so ubiquitous in factories and workshops worldwide. The alternatives in equipment design offer differences in technology, which guarantee the continuing use of this process in the future, need to be considered and understood.

The cleaning tank in the corner of most engineering shops hides a very well researched process using sophisticated chemistry. Its popularity is in its simplicity. The tank sump is heated, fitted with cold coils around the internal surfaces at the top to retain the vapour.  Fill to a few centimetres with a non-flammable solvent able to dissolve contaminants, boil to form a vapour 3 to 4 times heavier than air to fill the tank. Hot solvent vapour condenses on the cooler target parts at workplace temperature. The hot liquid solvent dissolves oil and grease and other contaminants. Used solvent returned to the sump revaporises continuing the cycle until parts have achieved the same temperature as the vapour when, with no further condensation, the process is complete. Simple but perfect. Highly productive and economical, parts removed from the cleaning process are clean, warm, and dry in 5 to 10 minutes. 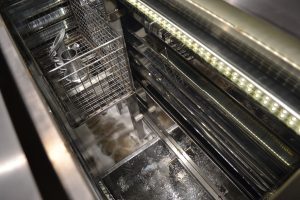 Historically chlorinated hydrocarbons have been the solvents of choice for the “Condensation Cleaning” process. Compatible with most materials of manufacture, stable in constant use, producing a non-flammable saturated vapour heavier than air at a temperature greater than ambient.  In Europe, the United States and in other advanced industrialised economies increasingly stringent legislation to control emissions of VOCs, especially solvents, has led to new formulations for paints and other coatings where water replaces most of the solvent. In the early days the quality of water-based paints was not as good as traditional solvent-based coatings, but innovation has driven the development of new polymers with results as good as, if not better than, the solvent-based originals.

As with coatings, cleaning systems have had to change. With increasingly demanding standards of cleaning required for precision engineering, electronics, optics etc solvents are often first choice, for reasons outlined above, but these have been targeted by regulators and alternatives are encouraged by the relevant authorities and law makers often without serious consideration of unintended consequences. For example, water-based cleaning is encouraged as the obvious alternative, but this has many disadvantages compared to condensation cleaning as although the machines are simple and relatively cheap the processes require multiple heated tanks for immersion or spray processing or long programmed cycles in batch machines for cleaning, rinsing, and drying. Water based processes are slow, energy intensive and occupy more floor space than solvent-based condensation cleaning equivalents where only one tank with a small footprint is needed, delivering shorter process times and, most importantly for the environment, using minimal energy.

The ideal cleaning process would be “Condensation Cleaning” using water but due to the physical characteristics of the water vapour/steam and the inability to carry onto the surface of the targeted parts surfactants to remove the oil, grease and soils and the difficulty and expense of rinsing and especially drying this can only ever be a dream.

Historically chlorinated hydrocarbons have been the solvents of choice for the “Condensation Cleaning” process. Compatible with most materials of manufacture, stable in constant use, producing a non-flammable saturated vapour three to four heavier than air at a temperature greater than ambient.  The traditional solvents such as trichloroethylene exhibits all these characteristics however concerns about its carcinogenic properties and the danger to operators by exposure, led to a continuing search for a safer alternative. 1,1,1 trichloroethane based solvent formulations became popular in the mid part of the last century as a safer replacement. An excellent solvent, safer for users, it proved to be depleting the protective ozone layer around the Earth and was subsequently banned. With the development of the REACH legislation in Europe, trichloroethylene was again allowed with restrictions and stringent controls for use in authorised machines which control emissions to very low figures close to zero. 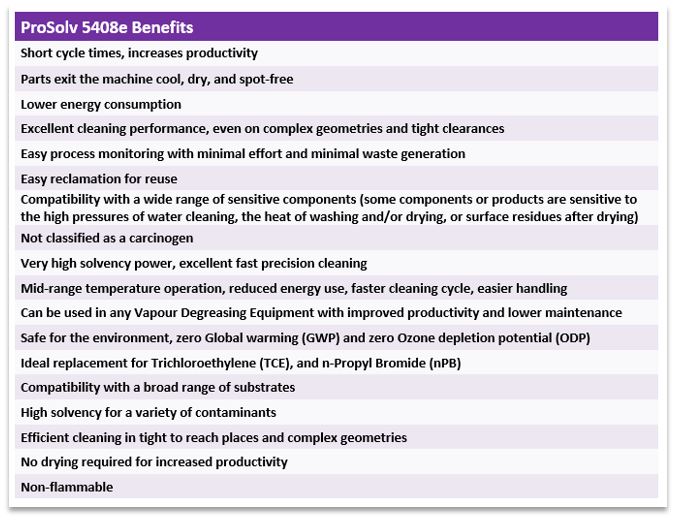 Sealed Tanks
As with all legislation for chemical use regulation and restrictions drive development of associated processes and equipment. Sealed tanks are now standard with many different designs available. The most common are discussed below.

The single tank hermetically sealed machines favoured by some manufacturers uses a process tank to contain the solvent and a separate storage tank/vapour generator. Baskets loaded with parts to be cleaned are introduced from the top or through access points on the side of the tank. Lids or doors hermetically seal the tank. Solvent is pumped into the process tank where agitation, ultrasonics or pumped liquid is circulated through the parts. Used Solvent is removed to the vapour generator, condensing coils controlling the vapour are linked to coils located in the vapour zone which, when the cycle is complete, collapse the vapour.  The process tank is emptied. Controlled air introduced to process tank is then recycled through carbon absorption units to remove traces of solvent until the concentration is within regulatory standards when the lid is released for the basket of parts, clean and dry, to be removed and replaced with a further basket. Variations of process within the hermetically sealed tank are possible using sprays of cold or hot condensed solvent, immersion with or without ultrasonics and revolving baskets to cover most of the problems experienced when processing machined and fabricated parts. Continuous external distillation of the contents of the vapour generator is also an option depending on contamination.

The alternative technology is much simpler and uses well tried techniques not requiring the long recovery times of the hermetically vacuum sealed processes. The multilevel system uses a standard vapour degreasing tank design with a sealed loading section above the process tank. Components to be cleaned loaded in work baskets or jigs are fed to the load section by hand or conveyor, an internal platform raises and lowers the baskets in controlled cycles.

Loading complete – the load enclosure is sealed to completely isolate the process. Then seal on the process tank is opened and the basket automatically lowered into the cleaning section which can be simple condensation cleaning or immersion cleaning with or without ultrasonics or power sprays. Revolving baskets can also be added to improve cleaning in blind or through holes or oil ways in castings and fabrications.

On completion the basket rises to the area where the condensation coils are located, and parts allowed to drain and dry, basket raises into the load section when the process tank is sealed. A fan circulates air within the load area which can be recycled through carbon absorption systems if no external exhaust is preferred.

As baskets entering the loading space contain parts drained and dried only very small amounts of solvent are carried in the exhausted air which is monitored to ensure compliance with appropriate legislation. When this is complete the seal opens fully for removal of cleaned components. The loading section can be fitted with top or side seals allowing baskets to flow through on conveyor systems or be removed by hand or hoist. No solvent enters the work area. Both processes will produce parts cleaned to the highest standards but the choice of which offers the best solution needs a little more consideration.

The hermetically sealed vacuum process is complicated with the need to move liquids in the machine. It is relatively slow as the carbon adsorption process has to remove high levels of solvent from the recirculated airstream from the process tank. This is inefficient as adsorption rates for carbon fall rapidly with increasing saturation.  Final levels of solvent in the tank when the lid or loading door opens will be dragged into the workshop and the area where the operator is working. Long process cycles reduce throughput.

The simpler multilevel systems where movement of liquids is not required are more efficient and offer much faster process times.  Cost of manufacture is also reduced as no liquid movement or vacuum is involved. The extracted loading section ensures no leakage of solvent into the work area giving complete safety for operators and factory staff. Envirotech Europe also offers workplace air monitoring to ensure VOC’s from the solvent are within exposure limits and your machine is operating to specification. 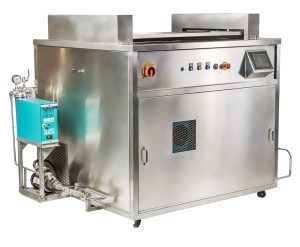 Conclusions
Both designs of process machines discussed above fully comply with the emission regulations of the EU and U.S authorities. Which to choose will depend on many factors which should be discussed with equipment and solvent suppliers who have the experience to advise on which offers the best process for the application. Equipment and solvent must work together, so it is advisable to ensure that the suppliers co-operate to offer a package with high levels of responsible care and product stewardship to ensure the best and safest installation. EnviroTech personnel and distributors are trained to work with equipment suppliers to advise on the use of ProSolv® 5408e vapour degreasing solvent for the most satisfactory outcome.

The “Condensation cleaning” process still gives the highest levels of economical cleaning with minimum energy usage, low footprint on the factory floor, safety for the operator, and high production rates with low solvent usage and environmental impact. With the new generation of sealed cleaning machines its future as the process of choice is assured.
Photograph of Solvac equipment courtesy of C&C Hydrosonics.

FURTHER INFORMATION
Please visit our website https://www.envirotech-europe.com/prosolv5408e for information about other uses and applications for ProSolv 5408e.

All products are supplied and supported by EnviroTech Europe Ltd. Manufactured in the United Kingdom and available on short delivery times through our dedicated team of distributors worldwide.

Solvent of choice for critical cleaning of oxygen components and services